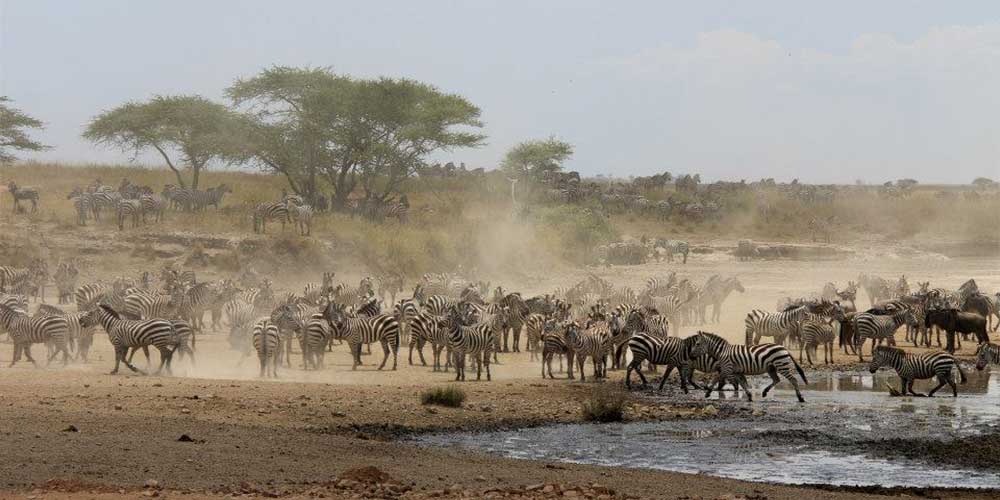 During this 6-day camping safari you will visit the Lake Manyara National Park, the Ngorongoro Conservation Area and the Serengeti National Park. While this safari has something for everybody – birds, the Big Five and a crater filled with wild animals, it is also ideal for those with limited time.

You will be collected from the airport and transferred to your hotel in Arusha (45 minutes depending on traffic jam). Depending on your arrival time, you will have an opportunity to explore the hotel grounds, go for a dip in the swimming pool or partake in any of the offered additional activities available

The park, which stretches along the Rift Valley Escarpment, is named after the shallow alkaline Lake Manyara. The lake can be seen through a hue of pink, due to the large numbers of flamingos, seasonally flocking to its shores. The more than 400 species of birds make this park a bird lovers’ paradise and on any given day 100 different species can be observed. Apart from the avian inhabitants, giraffes, elephants, monkeys and antelopes can be spotted in the forest, acacia trees and grasslands. With a bit of luck you will be able to catch a glimpse of the famous tree-climbing lions, a somewhat uncommon trait for these large cats. After a thorough exploration of the park, you will leave and travel to the town of Mto wa Mbu, where you will spend the night on a campsite.

After breakfast you will leave Mto wa Mbu and drive through the cooler highland region towards the Serengeti National park. The world renowned Serengeti National Park, with its diverse landscape ranging from grass plains and dry savannah to marshy woodlands, is the stamping ground of many carnivorous predators and their prey. The park is home to the largest animal migration in the world and depending on the season you will be able to witness this spectacular event unfold. The herds of wildebeest and zebras journey in the short rainy season of November and December from the hills in the north to the southern plains before returning to the north during the longer rainy season of April to June. The location of the migrating herds is dependent on the yearly rainfall, but your guide will know where the best vantage points for wildlife viewing are. The night will be spent on a campsite in the central Serengeti.

Today you will explore the Serengeti National Park. Your guide will take you closer to where the migrating herds are to be found. During the short rainy season in November and December the herds make their way from the hills in the north to the plains of the south, returning north during the longer rainy season from April to June. Their exact location differ yearly as they migrate according to the rainfalls, but your guide will know where you will be able to see them best. Lurking close by you might even spot some leopards, cheetahs and lions. After an eventful day you will return to your campsite in the Seronera area for your evening meal and overnight.

Rise and shine! After breakfast at your camp you drive to Ngorongoro down into the crater. Inside the world’s largest caldera, you will see a diversity of wildlife ranging from black rhinos, Grant’s and Thomson’s gazelles, lions and leopards to elephants and mountain reedbucks in the forests on the slopes. You might also see buffaloes, spotted hyenas, rare wild dogs and some of the more than 500 bird species of the area. After an intensive game drive and a picnic lunch, you will leave the caldera in the evening and drive back to your campsite for dinner and overnight.

After breakfast we explore the colourful town of Mto-wa-Mbu for some last minute pictures and curio shopping. Afterwards we head to Arusha where the tour will end at the JRO or Arusha airport. We hope to welcome you again on one of our African adventures!